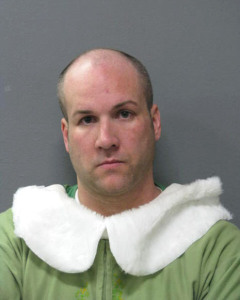 Of all of the pitiful mug shots that we have seen through the years, the sorrowful Santa’s helper in Louisiana. Indeed, Brandon Touchet, 34, who apparently got a bit too jolly while dressed as Buddy the elf. He brought back some fond memories of my old home of Lafayette where I lived while clerking for Judge Eugene Davis of the United States Court of Appeals for the Fifth Circuit.

Touchet was stopped at 3 AM Sunday driving above the speed limit and the police reported that the naughty elf smelled of booze and slurred his speech. He blew a .124 (over the .08 limit in Louisiana). Presumably, his counsel will argue that the BAL level is for humans not elves who have a greater tolerance for alcohol used to warm them in the cold North Pole winters. Besides, you try working in a non-union shop 364 days a year for a guy who does not even charge for toys and talks to animals.