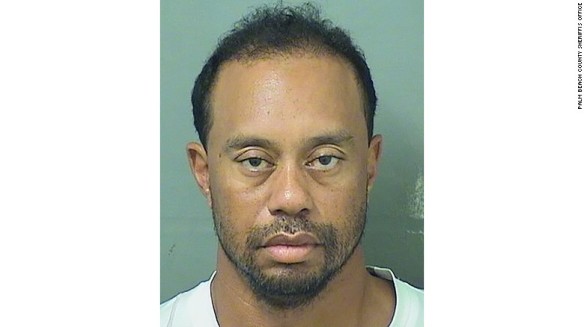 According to news reports, Tiger Woods has been arrested for DUI in Palm Beach County, Florida.

From the NY Daily News:

The 14-time major golf champion’s 2015 Mercedes was pulled over on Military Trail just south of Indian Creek Parkway as it traveled in the opposite direction of his home a few miles away.

“It’s based on visuals, a roadside test,” Rightler said of the reason for the arrest.

Police at the scene said they smelled alcohol on Woods’ breath, according to TMZ.

But Woods, who has been No. 1 longer than any other golfer in history, became “arrogant” at one point — then refused to take a Breathalyzer test, the site reported.

That resulted in an automatic arrest and license suspension under Florida state law, authorities said.

Tiger Woods needed to be woken up by an officer as his Mercedes was found stopped on a Florida roadway early Monday morning, before he was arrested on suspicion of driving under the influence, according to court and police records.

“It should be noted (that) Woods was asleep at the wheel and had to be woken up” the arresting officer said in the police report. “The vehicle was running and the brake lights were illuminated as well as the right blinker flashing.”

A breath blood alcohol test administered showed no signs of alcohol in Woods’ system, as he blew a 0.00. A urine sample was collected.

Woods failed a field sobriety test after his vehicle was found “stopped on the roadway in the right-hand lane and right shoulder” at 2:03 a.m. Monday in Jupiter, Fla. Woods was cited for improper parking/stopping, along with the driving under the influence citation.

Woods was described as being “sluggish, sleepy” with “extremely slow and slurred speech” by the arresting officer.

“Woods stated he didn’t know where he was,” the officer wrote. “Woods changed his story of where he was going and where he was coming from. Woods asked how far he was from his house.”

After police explained instructions several times, Woods was able to complete the task of reciting the national anthem backwards. He failed other components of the field sobriety test, including walking on a straight line.

“Could not maintain starting position,” the officer wrote. “Missed heel to toe each time. Stepped off the line several times.”

Tiger Woods released a statement explaining the incident from his point of view.

“I understand the severity of what I did and take full responsibility for my actions,” he said. “I want the public to know that alcohol was not involved. What happened was an unexpected reaction to prescribed medications. I didn’t realize the mix of medications had affected me so strongly.”

“I fully cooperated with law enforcement, and I would like to personally thank the representatives of the Jupiter Police Department and the Palm Beach County Sheriff’s Office for their professionalism.”

Despite that claim, Woods went on to apologize for the incident and negative publicity.

“I would like to apologize with all my heart to my family, friends and the fans. I expect more from myself, too,” he said. “I will do everything in my power to ensure this never happens again.